The CFA (French Apprenticeship Training Contract) enables students to continue their studies and be salaried by a health centre. Students who work as “salaried apprentices” are paid and college fees are covered by the employer company.

Apprentices alternate between lessons at the training college, placement periods and attendance at their employer’s business. Besides the financial aspects of the contract, the CFA enables apprentice students to experience the world of work and become professional faster. They are no longer just students; they are trainee employees.

There are conditions to the contract. Students must be at least 26 and find a clinic that agrees to hire apprentices. Students must therefore send unsolicited applications to the clinics of their choice following the IFMK management department’s agreement.

IFMK Assas and the CFA ADAFORSS support students throughout their search.

The apprenticeship training system shall be upheld. We shall upload the system’s terms and conditions soon.

Since 2009, IFMK Ecole d’Assas has given its students aged 26 and under in 2nd and 3rd year (information regarding students who returned to training before the 2015-2016 term and preparing for the physiotherapy state qualification in accordance with the amended Order dated September 5th 1989) to do an apprenticeship as part of their course.

Students who wish to do so contact centres (hospitals, clinics, rehabilitation centres, special education centres etc.) with a physiotherapy department in which they would like to begin their career after receiving the state qualification. The employing centre then chooses the employee it wishes to work with for as long as possible.

The apprentice is hired on a fixed-term contract and becomes a fully-fledged employee. The company’s laws, rules and agreements thus apply to the apprentice under the same terms as other employees. The apprentice receives a salary based on age and academic year. College fees are also paid by the employer.

In some cases, the Ile-de-France Regional Council allocates grants to companies employing apprentices. These grants are intended to fund college fees.

The apprentice’s timetable is divided into three “periods”: a period training at IFMK, a period at the employer’s and a period on placements. It is therefore a busy schedule.

The sandwich course schedule is agreed between the employer, apprentice and training centre. 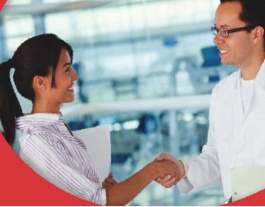 The idea behind the CFA (apprenticeship training contract)

The CFA was once reserved for professions in the industrial, construction or service sectors but it extended to further education several years ago. Some business schools put the system in place along with some Master’s degree courses.

The CFA has been available to nurses for twenty years.

The IFMK devoted itself to apprenticeship training for several reasons of equal importance.

The system implemented by the Region and CFA Santé Solidarité provides hospitals and rehabilitation centres with the support they need to fill the gap left by the lack of professionals. A new HR recruitment and loyalty policy seems to be being built.

Currently, 45 Ecole d’Assas students are in the system. The number of hospitals, rehabilitation centres and student candidates haven’t stopped growing so the Region and CFA Santé Solidarité have promised us their support in continuing to roll out the many contracts. 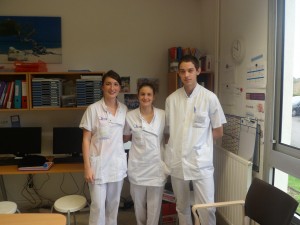 Ludivine, former apprentice (K2-K3) graduated in 2013 (in the centre) with Aurore and Andréa, two new apprentices at the Clinique de Bazincourt. 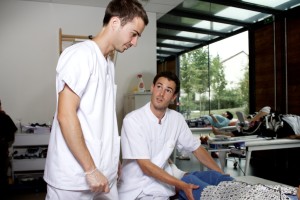 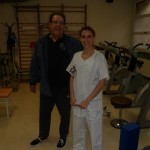 Hi, my name is Christelle Nagy-Demeurs (graduated from Assas as a physiotherapist in 2013). After 2 years as an apprentice then 2 years as a post-grad before becoming an AP-HP civil servant, I’ve just left my job as I’m moving to another region with my husband. I managed to experience half a year of service (which enabled me to be at level 3 six months earlier) thanks to a 2-year CFA.

From a professional point of view:

From a personal point of view, it was an incredible experience as I met my husband during my time at Hôtel Dieu hospital. I also met colleagues who taught me a lot, helped me in my work and became my friends.

I also have to say that I was fortunate to have incredible supervisors who always supported and encouraged me in all my projects (McKenzie) and initiatives (dance workshop). These are the reasons why I’m delighted to have experienced the CFA and I’d recommend the Hôpital Cochin for the standard of its work, its atmosphere and for professional development.
Christelle Nagy-Demeurs – Graduated in 2013

My name is Antoine and I’m currently in K3 at IFMK Assas. My Apprenticeship Training Contract began when I was still in prep school. I’d heard about the contract and, at the time, Assas was the only college you could join after a physics, chemistry and biology exam which offered the contract. From the start of my first year, I looked for an employer and in March I received an offer from the Centre Hospitalier Intercommunal de Villeneuve Saint Georges (94).
My first placement at the employer was in July. I couldn’t wait to start because my interview had got me excited but I was also a little nervous because I was going to be meeting my future colleagues. The team soon managed to make me feel comfortable by doing their utmost to do their best for me and provide what they could to boost my training both so I’d be ready to work in Villeneuve when I graduated and so I’d be an accomplished physiotherapist.
Although most of my placement time was on my employer’s premises, the team encouraged external placements, not only to add to my placement journey but also to experience other professional cultures. The team at Villeneuve had front row seats to watch the progress I made between placement periods and knew how to pinpoint the areas which it could help me progress in. This enabled me to have a complete training experience and I’d even say it was in-depth in terms of the employer’s specialities.
Obviously, one of the many advantages of the CFA is the vital financial support provided by the employer. It brings a sense of stability and peace of mind in the face of college fees. It also brings greater freedom to throw yourself into different projects which is great whilst you’re a student and you have the advantage of having guaranteed work once you’ve graduated.
The advantage of being at Assas for a CFA student is that they have real knowledge about this system that’s been around since 2009. As a student, you feel supported not only by the administration team but also your fellow students who are increasingly choosing this option.
I am completely happy as an apprentice at the Centre Hospitalier Intercommunal de Villeneuve Saint Georges which has met and exceeded my expectations.

Read more about our students.